Don’t get me a present. Don’t even bother with a gift certificate. Skip the tree. Forget the decorations. A turkey sandwich and a beer will suffice for dinner. Please don’t make me listen to that Mariah Carey song. There’s only one thing I really, truly want at Christmas time: a few hours spent watching a train do laps in a dimly-lit room.

In recent years, I’ve been able to satisfy my holiday train craving at the fall shows, most particularly the RIT show, the second weekend of December. That show closes out the season, and draws a variety of operating layouts from clubs all over the area. If I need to take a break from our own layout, I can wander the hall and spend time watching modern Lionel on wide-radius three-rail track, or British-prototype OO trains wending their way through quaint brick villages. Christmas music is playing on the PA, there are as many Santa hats as hickory-stripe choo-choo caps, and old friends are everywhere. The club, along with a few selected guests, gathers for a big dinner Saturday night at a Chinese buffet restaurant. The weekend has everything I want in a holiday gathering, and no annoying in-laws.

This year, of course, that didn’t happen. We did have one small exhibit earlier this month. One of our club members also belongs to an American Legion post in an outlying town, and arranged for us to exhibit there. We set up a modest T-Trak layout, the kind we’ve done for library shows. Setup took a little longer, as we’re out of practice. The ladies’ auxiliary made hot beverages and baked goods available. There were masks, hand sanitizer, a contact-tracing log, and other pandemic necessities on hand. So, yes, we did get to run trains once this season. It felt almost normal. Almost. 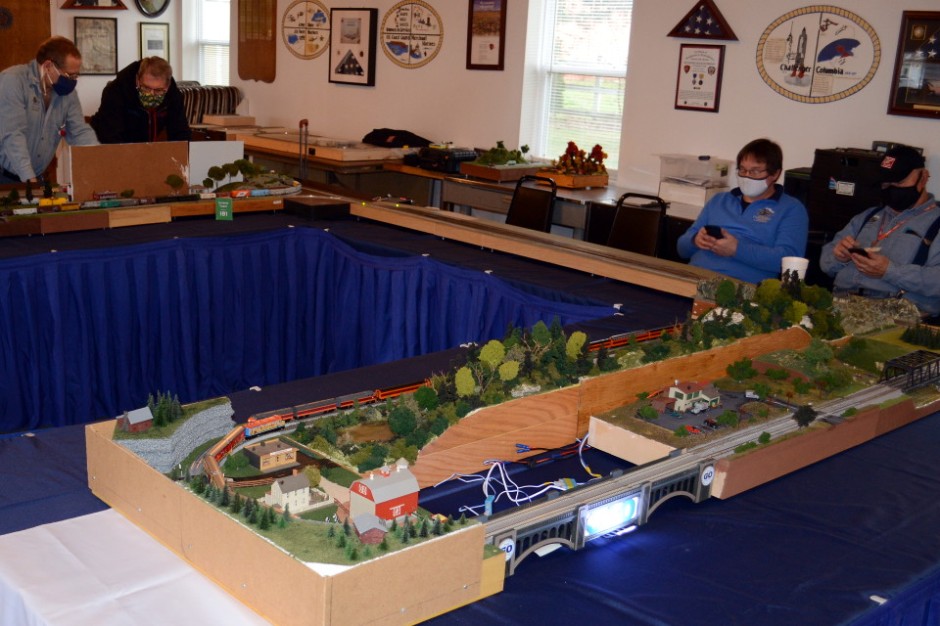 It wasn’t enough to satisfy my craving, though, so on Christmas morning, I set up the COVID-19 Emergency Railroad indoors, for the first time. It went together pretty much the same way as it did back in early July. I assembled the “short,” 8-foot-long version. I found the carpeting much more level than the asphalt, and considerably easier on the knees.

Naturally, the 20th Century Limited, complete with decoders and light kits, came out. It seemed sensible to put the Broadway Limited and its E-8s on the other track. With 13 and 14 cars respectively, each train occupied nearly half of its loop. For me, it was the best light show of the season.