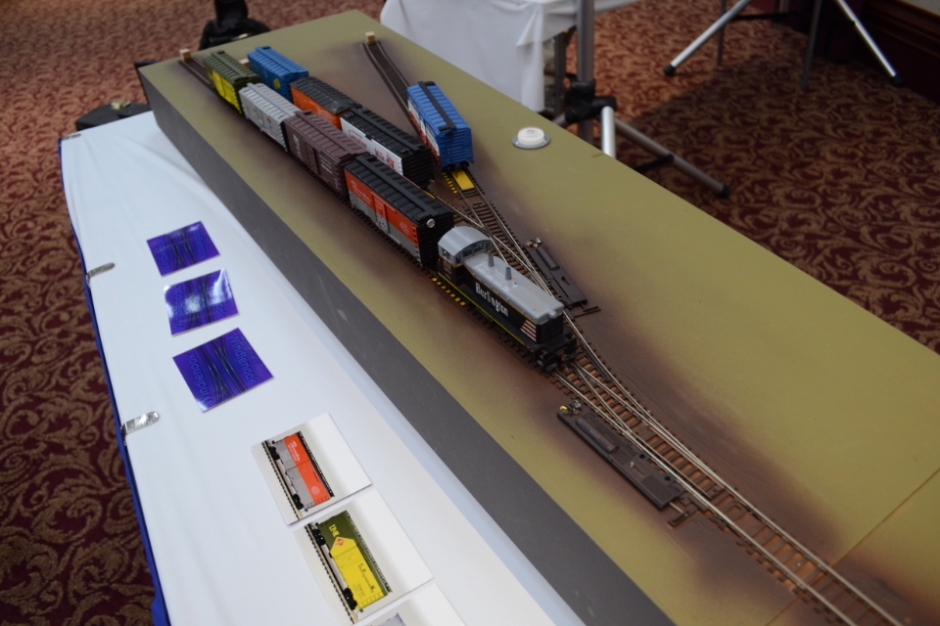 Last weekend, after teasing this project to my friends for over a year, I finally brought my new HO scale project out into the open. This is my interpretation of the classic Inglenook switching puzzle.

You may remember the Library Project from a while back. While I was pleased at how it turned out, I wondered if it would be possible to do more sophisticated operation through a window. I decided to try a very simple switching layout. It didn’t seem practical to do it with N scale—I didn’t have confidence that Micro-Trains couplers could be reliably uncoupled with just magnets. N scale would also have been hard to see from several feet away. So, for the first time in my life, I turned to HO scale.

Right from the start, I wanted to do this project on the cheap. The carpentry work is made entirely from scrap MDF from work. I used thicker material than I normally would, so the layout is pretty heavy. Since we’re only talking a footprint of 7 square feet, though, it’s still portable. The larger of the layout’s two sections is only 16″ x 48″. Three hardwood dowels hold them in alignment. They slide together with only a two-pin electrical connector attaching them.

You’ll find no hardwood fascias here, and no fancy joinery. In the name of speed and economy, everything is butt-joined, glued, stapled, and painted. My one design indulgence was the tapered shape: 16″ wide at the left end, 8″ at the right. Over the 84″ length of the layout, that works out to about a 5½° angle. Nice to know that all those hours in Sister Rosemary’s trigonometry class weren’t a complete waste.

For track, I went shopping for some secondhand Atlas code 100 track at shows, and it was easy to find. Atlas track has been around for decades. Four pieces of flextrack, a pair of turnouts, and a package of joiners were all I needed. Total investment, maybe $25 or so. If I’d been willing to use brass-rail track, I could’ve gotten it for next to nothing, but I wasn’t willing to compromise there. One of the turnouts already had the switch machine attached. If I’d been more careful with my shopping, I would have made sure that the other one did, too, but no matter. The hobby shop had a brand-new one on a peg, and it wasn’t that expensive. While I was there, I also bought two packages of Kadee #321 between-the-rails magnets, which were painted yellow after installation.

Once the track went on (laying straight track on a level surface couldn’t be simpler), I soldered up feeders to every piece of track, and tied them together, for maximum conductivity. I painted the fascias with some dark-gray paint I have. The deck got my standard scenic green, in anticipation of ground cover later. I quickly made up some temporary bumpers from hardwood blocks; the permanent ones will contain microswitches to detect when the locomotive is grinding cars against them.

Although the initial plan for this layout called for operation via an array of optical sensors in a window, like the Library Project, I decided to save that part for later, and build a more conventional control panel for exhibition use. The panel is knocked together from more MDF scraps, and outfitted with three arcade buttons and a joystick. I had the panel finished by late summer, but procrastinated on the requisite electronics, even though I’d committed the layout to a November show date. With just days to go, I attempted to build an Arduino-based throttle, but didn’t get it functioning in time. I did manage to rig the arcade buttons to a very simple diode matrix to control the turnouts.

I’ve already talked about my freight-car adventures. An Inglenook requires just 8 cars and maybe a backup or two, just in case. Just like I did with my N scale fleet, however, I kept right on purchasing well past the point of necessity. Counting the cars I picked up earlier this month at the Syracuse and Batavia shows, I’m up to about 20 now. It wasn’t hard to find unbuilt Athearn blue-box kits for $5. I also picked up a smattering of Tyco, Life-Like, and Varney cars that happened to have distinctive colors.

Locomotives were almost as easy. The going rate for a good used Athearn SW-7 seems to be $25. I picked up two, plus a newer Life-Like switcher. I did a little lubrication, and made sure the couplers were functional. 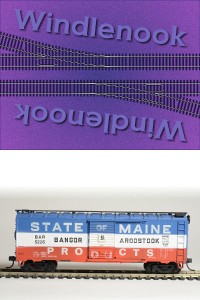 The operation of an Inglenook require the random selection of five cars. For car cards, I took a picture of each car, added a background image, and had 4″ x 6″ prints made. I scored each print across the center, sprayed adhesive on the back, and folded it in half to make two-sided 3″ x 4″ cards. They don’t shuffle quite as nicely as a poker deck, but they’re colorful and easy to use.

I coordinate exhibition layouts for an N scale modular club, so I’m familiar with the shows, their organizers, venues, and audiences. Windlenook, being neither modular nor N scale, wasn’t going to fit under the club’s umbrella, so I submitted a separate application to the Rochester Maker Faire, along with one for the club. The Maker Faire is a well-attended event that attracts families not necessarily familiar with trains. Lest my clubmates worry about abandonment, I assured them that I’d assist with the T-Trak layout’s setup and teardown as I always do. The show organizers gave us adjacent spaces, so mutual assistance during the show was easy.

The layout fits quite nicely on an 8-foot folding table. There are six adjustable feet underneath the layout for levelling, because cars rolling off in unexpected directions can spoil the fun of a switching layout. The unfinished control panel, with its non-functional joystick, was placed out front. A DC power pack provided speed and direction control. (Another pack, off to the side, furnished power for the turnouts.)

With the electronics only partially functional, I had to supervise closely during the show. The intended electronics will prevent people from doing dumb things like burning out solenoids, flipping turnouts underneath moving cars, and crashing at high speed into the bumpers…but none of that is working yet. Even so, things went pretty well. Two cars and one locomotive had minor mechanical problems, and I simply substituted them with others and went on with the show. Turnout buttons and Kadee magnets worked as intended, so that most rounds of switching were done with hands off the layout. There were a few derailments, none that caused damage. Most of the kids who asked to try the layout figured it out easily enough, even the process for uncoupling Kadees. Some of them stuck with it long enough to solve the puzzle and complete the train. One twelve-year-old was so adept that as soon as he finished, he shuffled car cards and did it all over again. 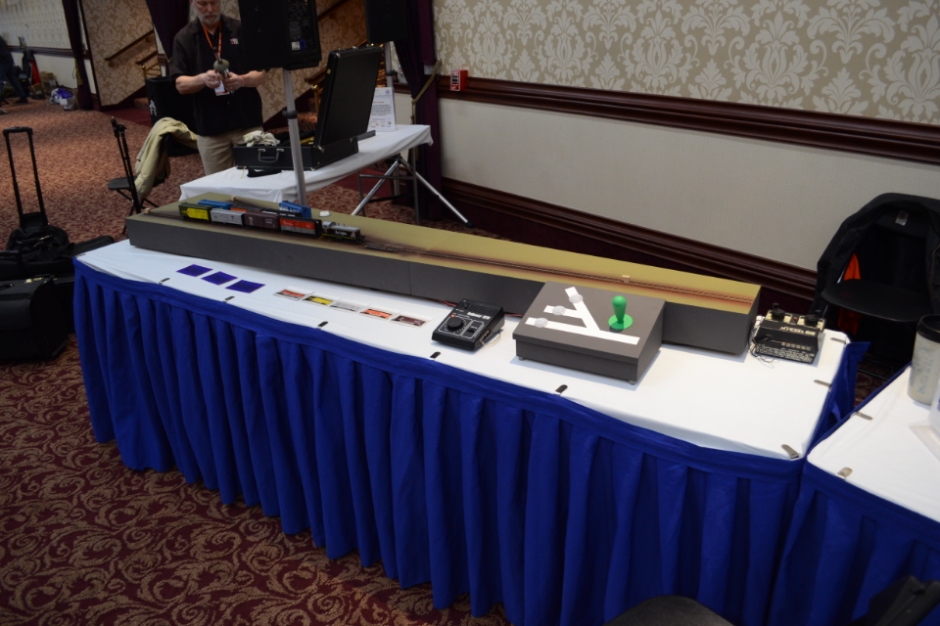 Overall, I’m quite pleased. This is my first real experience with the Inglenook design, and it’s proving to be a winner. It’s easy to set up, easy to operate, easy enough for novices to grasp, and challenging enough to hold their attention for a while. Now that the show is over (I’m back to running N scale on T-Trak layouts for the remainder of the show season), I’m ready to complete this project as planned, and exhibit it some more.

I witness much hand-wringing amongst my friends in the hobby about how we aren’t attracting the youngsters. If that’s your goal, try giving them an Inglenook to play with.