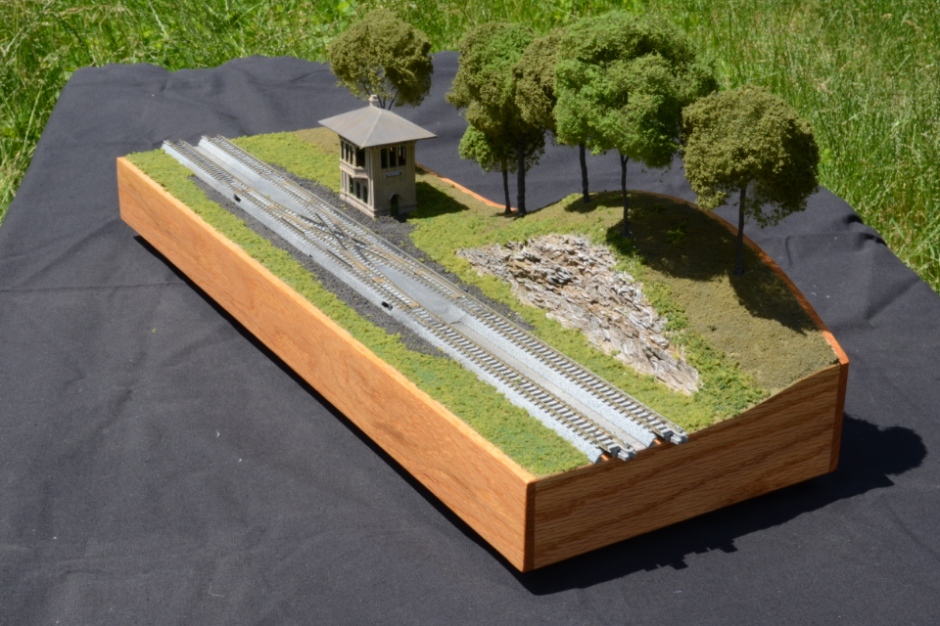 The blog is called “Furniture Railroads,” so…where’s the furniture? To make a long story short, my attention has been elsewhere. I still build furniture for a living, but my current employer has a stricter policy on personal projects than my past employers have. No personal work during lunch or breaks. I can take maybe fifteen minutes at the end of the workday before the lights go out. (His shop, his rules.) By quitting time, I’ve usually had enough of noise and sawdust, so I’ve been barely able to muster the enthusiasm for essential honey-do jobs, let alone hobby projects.

I did manage to push out a new T-Trak module carcase early last winter. It’s my standard work: red oak fascias, rabbeted corners, 1/4″ MDF deck with poplar corner blocks. I took it home and applied three coats of Minwax gloss polyurethane, carved the landform from Styrofoam, applied paint and Kato Unitrack, like I usually do. I installed the Kato double crossover that I’ve had for a while. If you’ve ever priced out the double crossover, you know it’s not cheap, but I got a great deal on this one, still new in its box.

I started taking this module to shows in late February, with scenery still incomplete. I located it on the back side of the layout, right next to the yard modules, where it immediately proved its worth. Owing to the cost, crossover modules are still a rarity at shows, but they’re extremely useful. Without one, you’re stuck with picking up and rerailing your train to move it to the other track.

The inner rails on the double crossover are already gapped, but the outside rails, inexplicably, are not. I expect to use this module adjacent to a reverse loop in a future layout, which would require complete isolation. Gapping the outer rails was simple enough; I used a cutoff wheel in a motor tool. I’ve got feeders and terminal blocks on both ends of the crosover. For now, they’re connected by jumpers, which are easily removed if necessary.

Turnout indication was also desirable, naturally. The indicators I installed on the yard modules last year have been fantastic, so I did something similar here. I used the same bi-color LEDs as before, but instead of soldering them back-to-back, I mounted them singly to short pieces of plastic I-beam between the tracks. There’s one at either end of the crossover. (Note that I haven’t gotten around to painting them yet.)

Over the course of the year, I’ve gradually added the rock formation, ground cover, trees, and my newly-completed Greendel Tower kit. There are still a few minor touches to add, as usual, but the module is essentially done. I’ll likely be taking it to every show.

After I got going on this module, Dave sold me another Unitrack double crossover. I don’t plan to keep it in the box for long.