The big night is here: you’ve invited esteemed members of the local model-train community to operate your new Basement Empire for the very first time. You’ve printed out waybills and switch lists, set out snacks and beverages, even swept most of the junk off your workbench. As the guests filter in, you show them around the engine terminal, gesture towards the bare plywood where great mountains will arise, and hand out the throttles.

“So, what era are you modelling?” asks one of them.

“My railroad is set in the mid-Fifties,” you state proudly, as you survey the mixture of steam power and first-generation diesels in your yard.

“But the ICC banned billboard reefers in 1937,” he says, pointing to your wood-sided beer car. “This car doesn’t belong here.”

“The Pennsy didn’t put plain keystones on their cars until 1961,” exclaims another, thumbing towards your string of 90-ton hoppers.

“Conrail didn’t even exist before 1976!” shouts a third, as he picks a high-cube boxcar right off the rails and starts waving it around. The crowd breaks out into peals of derisive laughter, and you fight back tears of humiliation and shame. It’s ruined, all ruined…

Wake up. It’s just a nightmare. Take a deep breath.

First of all, nobody’s going to laugh in your face about your freight-car fleet, so relax. Model railroaders are more polite than that. (As a matter of fact, I did once visit a “Fifties” layout with beer reefers and Conrail on it, and just kept quiet. Your layout, your rules.) Most of us, however, do aspire to some degree of realism. If you are such a hobbyist, let’s look at some ways to relieve those nagging doubts you may have about your fleet.

There are a few easy ways to determine whether a freight car is appropriate for your railroad.

Build Date: This is the first thing I check when I pick up a freight car on a train-show vendor’s table. Before the introduction of consolidated stencilling in the 1970s (more on that later), each freight car was clearly stencilled with a “BLT” date. Typically, a freight car is good for about forty years of interchange service, and might last longer in captive service if its owner still has a use for it. (Naturally, there are exceptions. A 40-foot boxcar built in 1950 wouldn’t have lasted much beyond 1980, when a glut of newer 50-foot cars rendered it obsolete to shippers.)

Railroad: A little research into the railroad situation of your era can help screen out anachronistic cars, but remember that cars don’t necessarily get repainted when a railroad is merged or sold. Penn Central cars did not exist before 1968, but you could still find cars marked for its immediate predecessor, the Pennsylvania, up to the turn of the millennium.

Consolidated Stencilling: Every freight car currently in use has black rectangles on the side, where vital data is stencilled on. These black rectangles were introduced in the 1970s, and would not be appropriate for earlier eras. 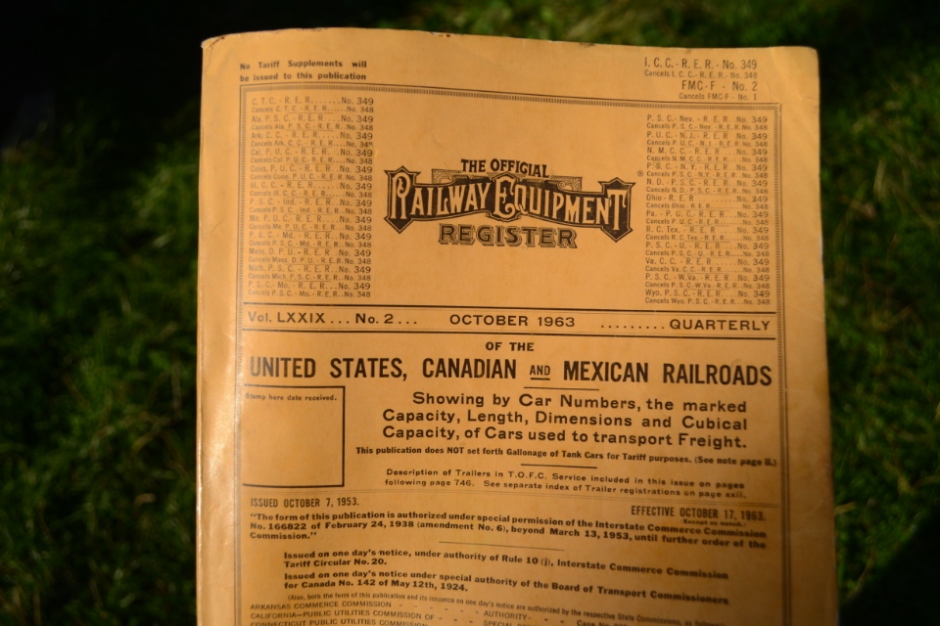 If you’re serious about freight-car research, your number-one resource is a copy of the Official Railway Equipment Register, or ORER for short. This thick book was updated every three months, and used by the railroads for the vital stats on every car in North America. I picked up the April 1966 edition at a show a while back, and for the 1963 era of my modelling, it’s reasonably close, but I’ve since acquired the October 1963 edition, which is perfect. How do you use it? Let’s grab a few cars, and look ’em up.

Example 1: PRR 564279. This car is a Micro-Trains model of a single-sheathed, outside-braced wooden boxcar, with a build date of 7-19. It’s pretty old for my era, but I was desperate to fill out my roster with all the Pennsy items I could get ahold of, so I bought it with fingers crossed. We turn to page 92 of the ORER, and find that there are no cars listed between numbers 505933 and 564409. This car, and all its immediate brethren, were gone by 1963. However, a look at the next line reveals two “Steel frame X26” boxcars, numbered 564409 and 565675, still listed. These are the same type of car as 564279, likely just a bit newer, and just useful enough to cling to the Pennsy’s roster. Verdict: doesn’t belong, strictly speaking, but there’s a bit of wiggle room. 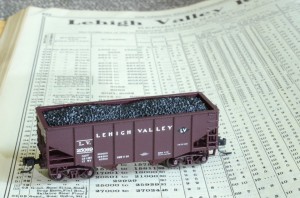 Example 2: LV 25099. This car is an Atlas model of a USRA two-bay, 55-ton hopper, the kind that was used by many railroads from World War I into the Sixties. Coal was the Lehigh Valley’s big commodity, of course, so they had a lot of these. Atlas has made them in multiple numbers, and I picked up several. It has a build date of 1939. Am I safe? Page 164 shows that there were 546 cars in the block of numbers between 25000 and 25939—one of the most heavily-populated entries in the Lehigh Valley’s listing. Verdict: no problems here.

Example 3: SDRX 12161. This tank car is a Micro-Trains 10,000-gallon single-dome tank with a build date of 3-25, and “Sinclair” spelled out in large white letters. I saw it on a show table and fell in love. Sinclair once had a refinery not far from where I grew up, and it was a major customer of the Wellsville Addison & Galeton short line before the refinery shut down around 1958. What does ORER have to say about it? The SDRX reporting mark is listed as one of several belonging to the Union Tank Car Line, and on page 666, the block of cars from 12117 to 12166 (50 numbers altogether) has five surviving members. The listing doesn’t say whether 12161 is one of the survivors, but it’s certainly plausible. What’s interesting is that less that 40 cars total carry the SDRX reporting mark in 1963. What’s the story here? The ORER can’t answer that, so we’ll have to turn elsewhere.

A lot of my in-depth research has come from magazine articles I’ve found over the years, or books I’ve picked up. My print research heavily favors the roads I model, so I have pretty good resources for the Pennsy, the Erie Lackawanna, and the Salzberg short lines. For other railroads, or for private car owners such as Union, there’s not much on my shelf. I therefore turn to that Great Answerer of Today’s Questions, Google. So, let’s enter some search terms…

“SDRX” ORER has already told me that in 1963, “SDRX” was assigned to Union Tank Car, which was (and is) a major owner of railroad tank cars, but who owned that reporting mark previously, and when did Union acquire it? Google reveals only that Sounder Commuter Rail currently uses the mark, which is of no help.

“Sinclair” Google leads me to a nice Wikipedia page on Sinclair, which in turn leads me to Sinclair’s web site. It so happens that they have a very comprehensive history up to 1969 posted, which reveals that “SDRX” was indeed Sinclair’s own reporting mark, that they owned over 6000 tank cars at one point, and that those cars were sold as part of a 1957 restructuring plan (the same plan that resulted in the closure of the Wellsville refinery). Okay, mystery solved. Sinclair sold off a non-core asset—their tank car fleet—to a company in that business—Union—and those cars were gradually retired or re-labelled with their own “UTLX” mark. Verdict: one SDRX car in a sea of UTLX cars is plausible in 1963. Luckily, I have a number of Micro-Trains UTLX tanks on hand for just such an emergency.

No? Well, that’s okay. It’s your railroad. Run whatever makes you happy. I’m a little happier knowing that I’ve learned some more things about freight cars, what they carried, for whom, and what purposes were served.