The Windlenook layout, unfinished as it is, has been out to a number of different places this year: a few library shows, an NMRA-sponsored 4H event, and even a birthday party. The electronics haven’t changed since last winter, but I have made progress on structures.

I picked up a cold storage warehouse at last November’s Batavia show. Somebody had already kitbashed it into a triangular half-building for use against the back edge of a layout, with that beautiful fire-escape detailing perfectly placed on the wide end. To fit it to Windlenook, all I had to do was trim a couple more inches off the back. That, however, left an awkward roof line above the fire escape. I solved it by filling the notch with some of the offcuts. 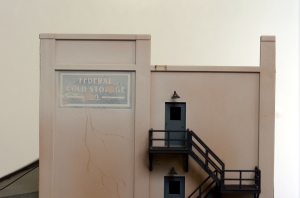 The cold storage warehouse, after being cut down to depth. Yeah, that roofline is a little awkward.

I found an old Revell signal tower for $3 at the Syracuse show. Its assembly was on the sloppy side, and I wasn’t particularly fond of the yellow/brown paint scheme, but it is a nice, generic, railroady-looking structure. I did a little repair work, and airbrushed dark green over the yellow.

There’s still plenty of room for more structures. I’m thinking about some oil tanks, a highway overpass, and possibly a station. The next thing I ought to do is get some ground cover down, but I’ve been holding off until I get some sensors installed under the track.

Windlenook has not yet gone to a train show. Most of the shows our club does these days have gotten stingy about providing space and tables—it does cost them money, after all, and shows are a source of much-needed revenue for the hosting organizations. I’d have to steal a table from our T-Trak layout, which I’m unwilling to do, even if the membership was supportive.

The library shows are a different story. We’ve been pursuing such shows more vigorously over the past year, and we’re finding that space and tables are never a problem. Community rooms seem to be an essential feature of public libraries now. We couldn’t ask for better spaces to exhibit trains: roomy, well-lit, carpeted, and stocked with good folding tables. I get to design sprawling, free-form T-Trak layouts, and there’s still room left over. There’s no controversy in giving Windlenook a table, and it always proves popular with patrons.

I had designed Windlenook’s controls in hope that they’d be easy to understand, and it’s been mostly successful on that score. Kids quickly figure out how to jog the joystick in just the right way to kick a reluctant Kadee coupler loose. They don’t always get the cars clear of the points before flipping a turnout, but once I get around to installing the intended sensors, that issue should solve itself.

Surprisingly enough, nobody’s broken anything yet. By now, I would have expected a busted freight car, some fried circuitry, or at least a mashed Kadee knuckle, but nope. Windlenook is as abuse-resistant as I’d hoped. Accumulated wear-and-tear is the result of trips from basement to car and back, not from exhibit time.

For me, the biggest surprise is how many girls are engaged by this. Typically, girls tag along to a train exhibit with the rest of the family. They may find the scenery cute, but otherwise display far less interest than boys do. The level of enthusiasm that girls have for solving switching puzzles is something I’ve not encountered it before. The play value of an Inglenook seems to transcend the trains themselves.