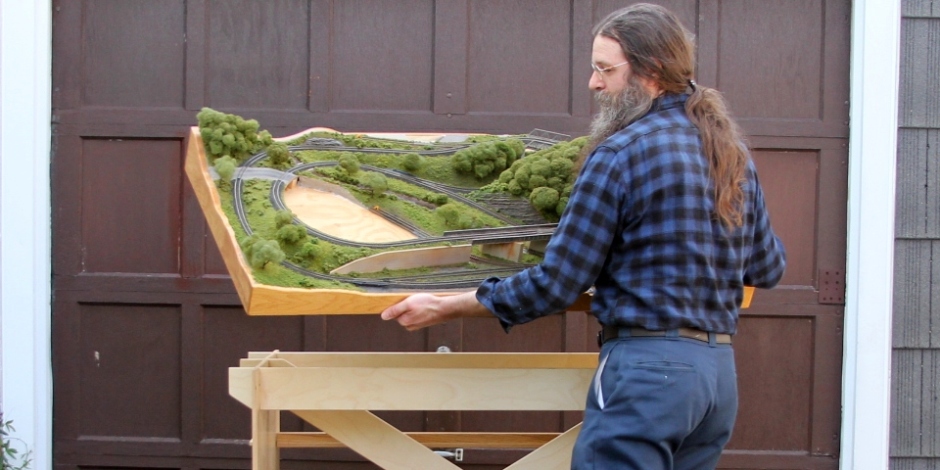 My name is Jeff Faust, I’m a woodworker, and I build model railroads. That’s all you really need to know, but bloggers are expected to drone on about their topic. So, okay.

My active participation in the hobby didn’t begin until I was five years old. I received a second-hand American Flyer set for Christmas that year. Decades of preparation preceded that momentous event. As an infant, I shared my nursery with an O scale trolley layout. I engaged in extensive railfanning activities before birth, with Mom and I accompanying Dad as he shot Super-8 footage through the front windows of PCCs. From early on in his own childhood, he collected and operated American Flyer trains as well.

Clearly, model railroads were my destiny. I have no cause to be angry with the gods for this.

The “furniture” part of this story didn’t come in until much later. I was out of college, and several years into a deeply unsatisfying life as an office worker, when an opportunity to switch to a woodworking career arose. I could tell you that my hobby ambitions played no part in my decision, but I would be lying. Earn a steady paycheck, and fill a critical void in my railroad-construction skill set, too? Where do I sign? That was eighteen years ago now. I’m building office furniture these days. The next time you’re in a staff meeting, take a closer look at what you and your bored coworkers are sitting around. I might have built that.

And in my off hours, I build railroads. I love being me.

Why do I place so much emphasis on the furniture aspect? Several reasons. It’s always troubled me that so many railroads feature excellent model work, only to be detracted by poor presentation. Many hours have been lavished on a railroad’s scenery, structures, track, and rolling stock, while the layout’s edge gets a quickie job in painted Masonite, or at best, pre-finished fake-woodgrain panelling.  Old drapes are hung to conceal construction-lumber framing and legs. It’s like Monet framing his landscapes with recycled Popsicle sticks. Why shouldn’t the railroad itself look just as good as its contents?

Besides, the Basement Empire is not my destiny. You know what the Basement Empire is, right? That’s the kind of sprawling railroad that serious model railroaders are supposed to aspire to. It’s an animated man-cave, containing an exacting re-creation of the countryside from Norfolk to Cincinnati, seen only by a lucky few who have been personally invited by the Empire Builder himself. If the Empire is a little rough around the edges, who dares criticize the Builder and risk eternal scorn, and worse, banishment?

I barely have a basement, and no garage, attic, or spare room to serve as an effective Basement Substitute. No Basement Empire for me. My railroad sits in household living space, where my wife, son, and all visitors will see it. Appearance, therefore, is especially important. Much of my railroading activity happens at shows, too, where appearance also matters. What’s going to better impress the seething masses, a fascia of knotty 1x3s with brown latex slobbered on, or one of gleaming clear-finished red oak? Take all the time you need on this one.

Aside from my fetish for hardwoods, I do have some other philosophical points that I’ll be making frequently:

The hobby is a great environment for learning and experimentation. I can take risks here, then apply that experience to the rest of my life.

I’m dead-serious about trains, but it’s still a hobby. I’m in this to make myself happy. Unlike the rest of my life, I have total control over what gets done and how. Well, almost.

Experience tells me that extra effort in construction pays off in operation. Sure, I enjoy the building part, but I enjoy it even more when people marvel at how well trains stay on the track.

Thanks for joining me on this ride.