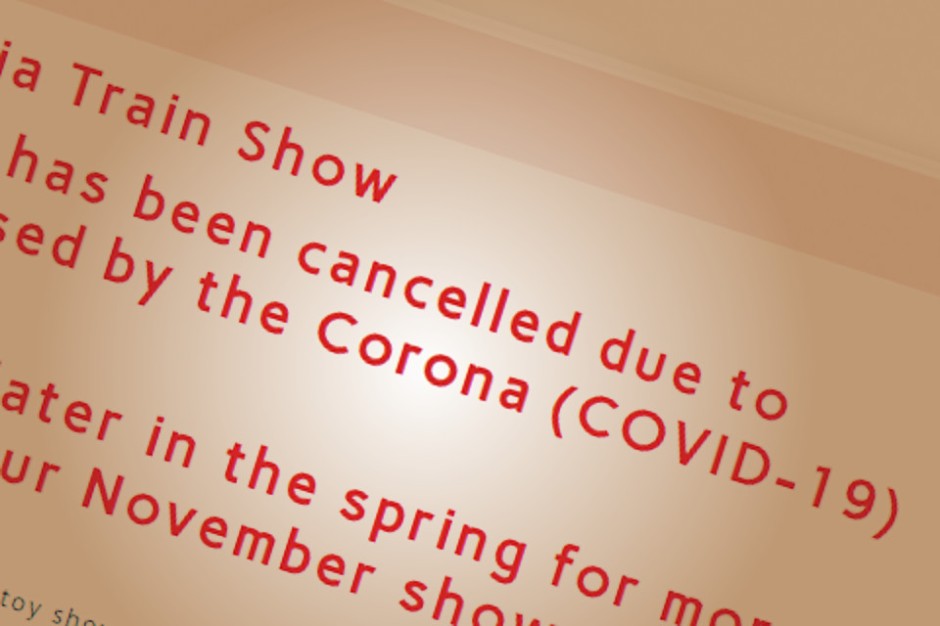 I’ve never seen anything like this. Occasionally, a train show gets cancelled for a snowstorm, or maybe some last-minute problem at the venue. But within the past few days, two local shows, and an upcoming NMRA division gathering, have been cancelled for the COVID-19 outbreak.

We exhibited a T-Trak layout at a small show two weeks ago. Even though the outbreak hadn’t touched anyone, it was a repeated topic of conversations throughout the day. (You might even say that it had already gone viral.) Opinions ran the gamut from “it’s just another flu” to “people have no idea what we’re in for.”

Last Wednesday, I went to the county hospital after work, to sign up as a volunteer attendant for a recently-installed O scale display layout in their patient lounge. I was asked several infection-related questions at the reception desk before receiving my visitor pass. In my conversation with the volunteer supervisor, she told me that precautions were being taken, but that no cases had been yet been reported within the county. Life was more-or-less normal.

Just a few hours later, the first confirmed case was announced, and things escalated rapidly from there. Classes, meetings, performances of all kinds were being cancelled all over the place. Schools and libraries were closing until further notice. Supermarket shelves emptied out faster than anytime I’d seen since the ’91 ice storm.

There was supposed to have been a show today. I got a call Friday night from the organizer, but by then I’d already seen the cancellation on the society’s events page. Just for good measure, I checked online for the next show, in two weeks. Yup, that one’s gone, too. It’s held on a college campus, and the college is shutting down. The next show after that is late April, and it’s anyone’s guess at this point whether that one will also be cancelled.

Dismayed as I am, I’m not about to argue the wisdom of this. Several of my friends have noted that the hobby is dominated by an older population heavy with risk factors such as hypertension. Sure, we all love trains, but we love living, too.

In the meantime, this period of social isolation might be a good opportunity to whittle down that pile of unbuilt kits I’ve accumulated.