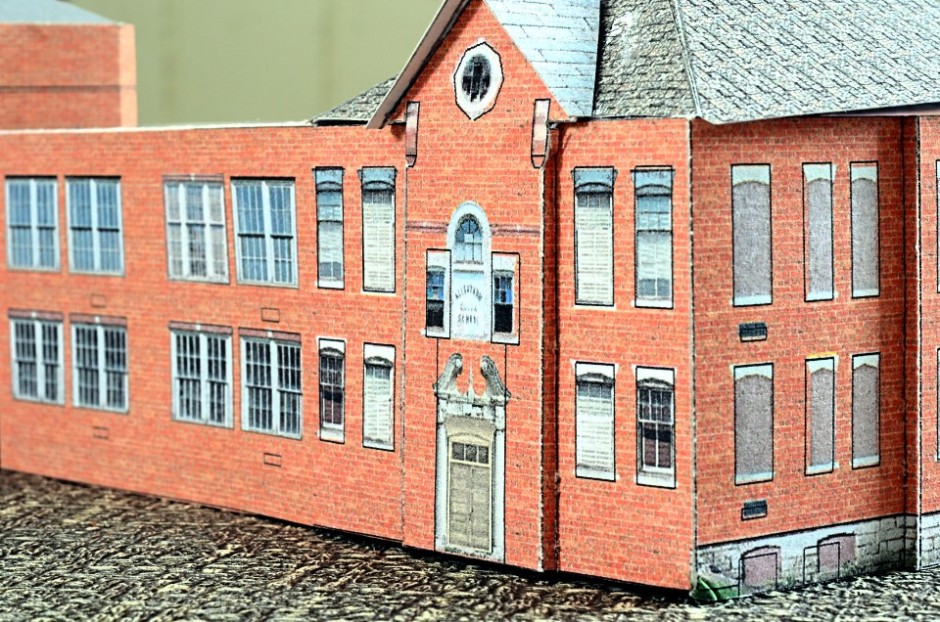 My elementary school was housed in a 1903 building with a 1933 addition, by far the most prominent building in a town just large enough to warrant a solitary blinking-yellow traffic light. By the 1970s, when I was enrolled, the school had been merged with an adjacent district, and the building downgraded from K-12 to a K-6 elementary. There was no elevator to the second floor, the third floor had been deemed hazardous and was off-limits entirely, and there was considerable doubt about the building’s compliance with new fire codes. Another addition was constructed to the larger school while I attended 7th grade there, and the old school closed for good the following fall. It still stands today, but abandoned, and in an advanced state of decay.

It’s been my intention for many years to build a model of the building, but life, career, family, other modelling projects…you know. I spent an afternoon shooting photos of the building with a borrowed camera, and that’s as far as I got. 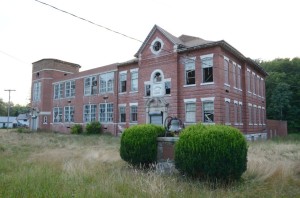 Meanwhile, I was becoming more active in the club scene, and Bill was gradually exiting. Bill was a modeller’s modeller. So many of the model-railroad guys I meet just throw money at the hobby shop, and open the boxes when they get home. Not Bill. He repainted and decalled much of his equipment. He was fearless about weathering. He started building a modest but sophisticated shelf layout with Atlas code 55 track. He was an unapologetic N scaler in the mostly HO-scale world of the NMRA. Then his health started failing, and gradually, he had to give it up.

He held a garage sale of most of his model-railroad items while he was still able to stand for short periods, and invited us over. I stopped in, looked over his collection, and picked out a couple of structure kits. Bill told me that he didn’t want to stop entirely, but despite the oxygen tank tethered to him, his stamina was slipping away. He was still doing paper structures, drafted on his computer, printed onto cardstock with an inkjet, trimmed, folded, and glued together. He showed me several, and they were beautiful.

When I got home, I emailed my photos to him, along with links to material on the county historical society’s site, and assured him that I’d be happy with whatever he was able to produce for me. It was over a year later when Bill asked me to come over and visit.

The model wasn’t perfect, but it didn’t have to be. He’d squared up and sized all the elevations, filled in broken-out windows, and captured the building the way I’d remembered it. From the clocks above my old sixth-grade classroom, to the bus garage out back, all the important features were there. If the day comes when I build a permanent version, I have Bill’s work to guide me.

Bill’s long struggle with illness ended on New Year’s Day. I will miss him greatly.